The Steam Mining Engine of the Anna Mine 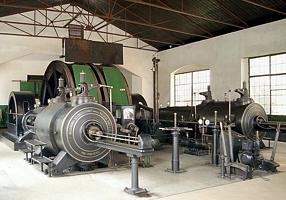 One of the most valuable exhibits of the Mining Museum in Příbram at the Březové Hory Community is a steam mining engine of the Anna Mine. It is placed in the engine room and it was constructed in 1913. In the year which followed the new engine was installed as the biggest steam engine enabling direct transport from the depth of 1 300 m, later 1 450 m. 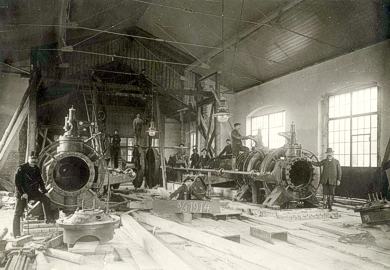 The constructers decided for a two-cylinder, a horizontal compound giant with a Radovanovič's trip valve gear of steam (Drilling of steam cylinders 800 mm, travel 1 800 mm, working vapour tension 9 atm). It was made in 1912-1913 by the Breitfeld & Daněk Company, later the Czech-Moravian Ironworks Kolben & Daněk, Prague. Its effective power was 750 HP that means 554.35 kW. The raw ore was transported in two carriages with a capacity of 0.63 m3 and moving in speed of 12 m/s to the three-level mine-cages. 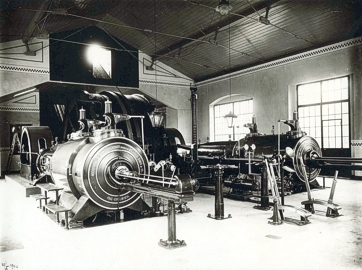 The engine represents an extraordinary important output of the Czech engineering with its effective power and with other technical parameters. It is protected by state as a cultural heritage. The steam mining engine of the Anna Mine, which is of a unique design, was running without any big repairs or reconstructions until the termination of mining at the Březové Hory Mining District in 1978. It was working on compressed air in the last years of its running (from 1975). In the 1930s it was the only steam engine in Europe exploiting from the depth of 1 350 m. Since 1995 it can be admired by the visitors of the Mining Museum in Příbram, at the Březové Hory Community. 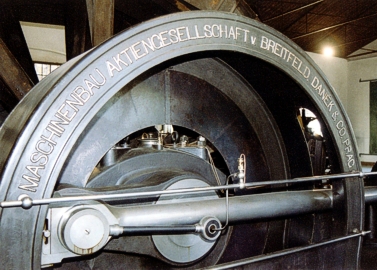