The Drkolnov (August) Mine Water Wheel 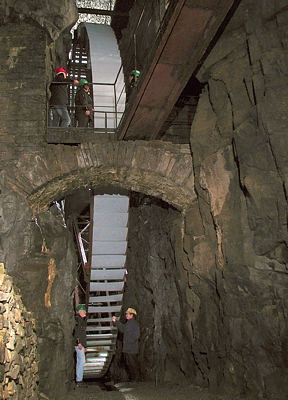 By Convention of the Mining Objects Use for Cultural and Educational Proposes, signed on July 8, 2003 by the Management of the Uranové Doly (Uranium Mines), a branch office of the DIAMO, a state administrator of the mining objects and by the Mining Museum in Příbram, an interesting technical relic of the past was opened to public. It is a mining object of international significance - a water wheel dated back to the 19 th century and situated in the underground of the Drkolnov Mine. The Drkolnov Shaft, originally called August's, was driven in 1836. The maximum depth of the last level was 403.5 m, the total depth was 425.2 m and it was reached in 1872. The preserved water wheel used to be a part of the hydraulic engineering works of the mine. Formerly there were two water wheels in the Drkolnov Mine. One of them was maintained to drain water from the underground and has been preserved up to the present day, the other one used to drive the mining engine and the dressing equipment. The Drkolnov Water Wheel is 12.4 m long in a diameter, it started running around 1850 and it used to drain underground water with sophisticated water traction. The original wooden wheel was getting rot, so it was replaced by a new, iron one. Its effective power used to be 16 HP. 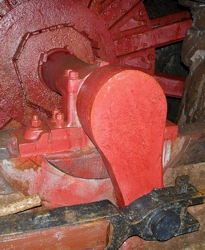 The mineable ore stocks in the Drkolnov Mine did not prove profitable, so it was just a question of time when the mining works would be ended. By 1891 the old dressing plant and its equipment had been demolished, in 1896 the exploitation was ended and the geological exploration was stopped. In 1899 the mining tower was pulled down, in 1913 the boiler house was demolished and so was the chimney. 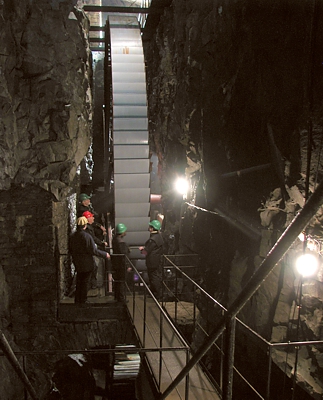 After that, drainage of water was the only mining activity. It had been running for about 50 years and it had taken water from underground of the mine. After ending the exploitation it drew water for the town until 1961. It was one of the matters why it was kept up to the present days. Thanks to the accommodating help and favour of the Rudné Doly (Ore Mines), Příbram, a former state enterprise, later the DIAMO Company and its branch office the Management of the Uranové Doly (Uranium Mines), Příbram, the underground of the mine was modified and adapted to tourist purposes; between 2000 and 2003 the water wheel was fixed up, reconstructed and preserved. 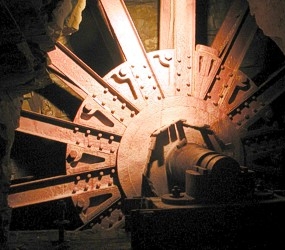