The museum is located in the George of Poděbrady square, in the historical building of the so called Mint, dating from the 15th century . The Lord Mayor's office in this royal mining town on the banks of the gold bearing river Kocába was originally located in the building of the Mint. Several exhibitions feature the history of the mining and the processing of gold in the Nový Knín area from the oldest times up to the 20th century. They also provide information about the history of the town, about local industry and local crafts. There is also an exhibition about the history of the world gold panning championship in the Czech Republic and in other countries. 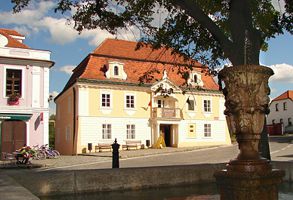 The town of Knín was first mentioned as early as 1186 in connection with an event of great historical consequence for the history of the Czech state. In 1186, an agreement known as The Peace of Knín was signed here at the local Przemyslide court. The Peace of Knín confirmed the reintegration of Moravia to the Principality of Bohemia. The agreement was the result of peace negotiations between the Czech prince Bedřich and the Moravian margrave Konrad Ota. The fact that these negotiations took place in Knín underlined the importance of Knín in thosetimes. One of the most precious items located in the museum, the so called Viking bracelet comes from this period. 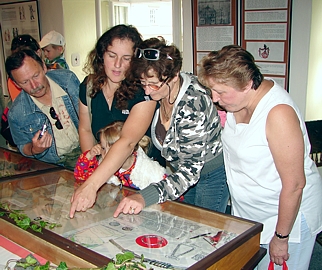 The Czech king Přemysl Otakar I. stayed in Nový Knín in 1218 and 1219 and another Czech king, John of Luxembourg stayed here in 1341. The town is also mentioned in a document from 1321. In subsequent years, the mining of gold developed considerably in this region. This attracted miners who settled in this area. In 1379 the town already had its own school. The development of this town was however then interrupted by the Hussite wars. The town was burned down and during the fires precious documents were destroyed, especially a set of priviliges given to Nový Knín by the king Sigismund of Luxembourg in 1437. Later on, the king George of Poděbrady confirmed in writing all the existing rights of the town. The town was exempt from paying taxes. It was free to open mines, it was entitled to collect wood from the royal and the hospital fields, it enjoyed the priviledge to graze its cattle on royal meadows, it had the right to hunt for rabbits and birds on community land, and to fish in community waters. It had the right to brew and sell beer, and it also had the right to execute criminals within the area of one mile from the city. 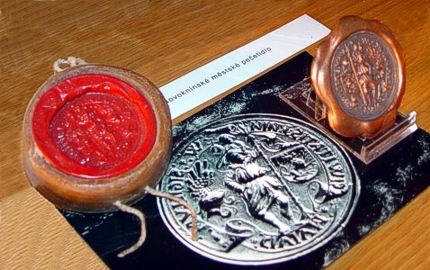 Nový Knín experienced its most significant flowering in the 16th century. Knín was one of several royal gold mining towns, along with the towns of Jílové and Kašperské Hory. Just as the other mining towns Nový Knín was also governed by the highest mint master. 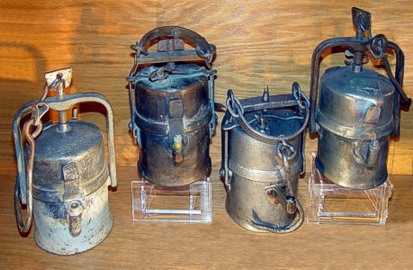 Nový Knín was seriously affected by the Thirty Years' War in 1639. In October of that year, Swedish troops commanded by General Banner entered the city, looted it, burned it down and killed most of its inhabitants. For many years subsequently, Knín was in ruins. In 1680, the remaining inhabitants aquired a confirmation of their rights from their king Leopold I. the Habsburg, but the former wealth never returned to the town. Later attempts to renew gold mining were unsuccessful, althougth attempts to mine gold were made here until the second half of the 20th century. In 1776 under the rule of the Empress Maria Theresia, the importance of the town grew a little when a beekeeping school was founded here. This was the only school of its kind in Bohemia. A governance reform of 1850 deprived Nový Knín of its ancient privileges of the royal mining town. At this time, it transpired that a number of obstacles would henceforth hinder the town's development. When in 1897 a raiway line was built from Prague to Dobříš it passed Nový Knín at a distance of some 1,5 miles. The new railway line did not really bring much prosperity to the town. The economic conditions of the area worsened. 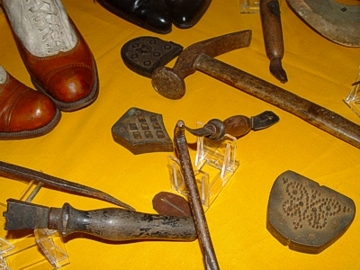 Nový Knín depended primarily on local crafts and agriculture and on trade. The development of these activities on the first half of the 20th century was interupted by the WWII and by the communist regime after February 1948. Currently the face of the town is changing due to the return of property once confiscated by the communists to private owners. In 1990, a municipal conservation area was created in Nový Knín. In 1996 Nový Knín was given back the status of town. 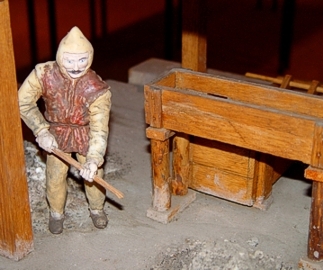 However Nový Knín will hardly ever regain its former glory of a royal gold mining town. Nevertheless, it is a historical town, attractive for tourism. Nový Knín has not been damaged by large scale agricultural activity or by large scale industry and so it can play a positive role in the further development of the local picturesque region. The Gold Museum in Nový Knín (a branch of the Mining Museum Příbram) intends to contribute to this aim.

The museum which is located in the historical building in the so called „Mint“ in the square of George of Poděbrady features the mining activities undetaken in the area of the gold bearing river Kocába from the ancient times until the 20th century. This historical epoch is placed in the context of the history of the town. In the 15th century, the gold extracted here was processed here and then sent to mints in Prague and in Kutná Hora. From 1561 onwards, the local mint building was the office of the Lord Mayor of Nový Knín. The Mint, a renaissance building, which was originally built in Gothic style, was later re-built in Baroque style. Its Empire facade comes from 1801. 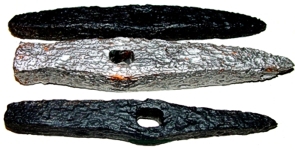 The exhibitions which are placed on the first floor of the building feature the history of the mining and of the processing of gold in the Nový Knín area. They deal with the history of local crafts, local industry and with the history of the world gold panning championships in the Czech Republic and abroad. Educational trails providing mining and geological information can be found in the vicinity of Nový Knín. These trails will lead the visitor along the traces of mining in this area which are visible to this very day especially in the area of villages of Čelina, Chramiště, Kozí Hory, Libčice and Mokrsko and some others.
webdesign | websystem | kao.cz + internet.pb.cz
2011 - 2021 © www.muzeum-pribram.cz